Strangest thing: I got an email from a friend who said that one of our songs was on an ESPN program. Begin Again, in fact.

We license the ISOAUT album through PumpAudio and they can license our music to whomever would like to use it. We get just a few bucks out of it, but it's nice to think that these songs begin to take on lives of their own...going out into that world of ours.

Remy in his Bumbo 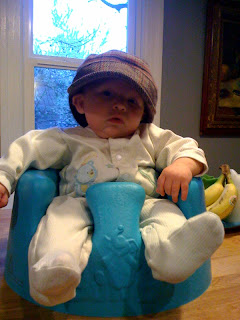 I'm starting a winery. Here in Portland. With my friend Chris, who is currently the assistant winemaker at Arcane Cellars (the winery that I also work at).

This has been a dream of mine for some time. I have imagined Holly and I moving to some pastoral place in the Sierra Foothills after the boys are graduated, planting some vines, and making some wine as we age gracefully, with no weight gain.

But that's a helluva long time from now and I thought, what's wrong with Portland? Why not start now? 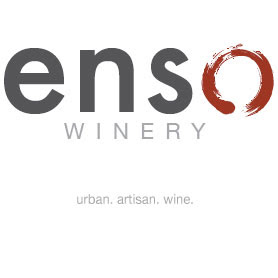 We are making our first commercial batch of wine this fall in Chris' garage. It'll take the better part of a year for that wine to become ready for sale, so doing it in his garage will keep overhead low. Next summer (2011), we'll find a spot here in Portland, hopefully not far from our house, where we'll move the gear to and open a tasting lounge to try, drink, and buy our wines (and perhaps some other folks as well).

We're calling it Enso Winery. The idea is capturing balance, creativity, and existential expression (of ourselves, the terroir, the year) in our wines.

Here's a little snippet I came across after Holly suggested the name...

"It is believed by many that the character of the artist is fully exposed in how he draws Enso, and that only one who is mentally and spiritually whole can draw a true Enso."

We're planning on making a Zin and a Malbec, some Petite Sirah and Mourvedre, and our whites for this year will probably be a Pinot Gris and a Riesling. We'll also make a rosé out of some of our reds. Very exciting.

So, that's it. We have forms filed with all the different regulators (we're talking 100+ pages of stuff), agreements with grape growers, gear on its way, barrels in storage. Just a matter of time.

Oh, on the topic of grape growers, true, we are not growing our own. And that's something that I am both grateful for and disappointed about. Some day, I hope to tend the vines that will produce our wine, but it's too high a cost and too huge a risk to undertake just now.

I had a conversation with a good friend today and it reminded me about this quote from Anthony de Mello...

"May I become your disciple?"

"You are only a disciple because your eyes are closed. The day you open them you will see there is nothing you can learn from me or anyone."

"What then is a Master for?"

"To make you see the uselessness of having one."

Exactly, I would say.

My friend responded, wondering if this wasn't what Jesus meant when he told his disciples that 1) He had to leave so that 2) They could do more than he could even do.

All takes me back to what I said months ago.

Why I am Grateful to Have Been Raised Christian

Part of my journey has been to realize that I am in a particular place and time, formed uniquely by this place and time and the other places and times in which I was a baby, a child, a teen, a young adult, and now. So many assumptions about how the world really works. A great many people realize in adulthood that our assumptions aren't necessarily wrong, but they are unique to each one of us.

As I have distanced myself more and more from what is generally called Christianity, I feel that I have been afforded the chance to see it from several perspectives. And while I no longer feel bound to that tribe as a specific identity, I really do appreciate the formation process it offered me as a human being.

I have realized that by specifying and binding myself to something in particular, I am able to see the limits of myself, of people, of ideas, etc. It offers a context to view the grand human experiment. Not much happens in a vacuum anyway. :)

Each person learns about life in some sort of environment...and mine was specifically American and Protestant...even more specifically, white, middle-class and southern. :) While a great many of my peers were being formed by a broader American worldview, I was brought up in narrower, ethnically-tribal story.

A great many of you know that I didn't just grow up in this story; I bought and sold it, too. I was it's poster-child for a good deal of time. And this wasn't inauthentic. I have always wanted to understand the world and God and myself. Christianity was one of my first channels by which to do that.

So what I'm trying to say is that, given the immense number of traditions I could have been brought up in, I'm quite happy about having been brought up Christian. Being a part of a church and youth group gave me social connection that I needed as a child. I was nurtured by people who were not family, I was given opportunity to develop my gifts, and I had a safe place.

Growing up in a religious world also offered me the possibility to think critically about dominant culture. This is something that has taken me a long time to appreciate, as this trait of religious folks is generally quite off-putting or plain mean. Christians judging people for doing what was "normal" by most people's perspectives. But what is normal anyway? That's simply the norm for some particular story.

My ability to eventually critique Christianity came from my experience within Christianity. And I deeply cherish that.

Though religious people are sometimes caricatured as all being bigotted and judgemental to outsiders, they deeply love their own. And sometimes some of them love outsiders as well. :) I definitely felt that love. I would suggest that an inordinate amount was poured out on me. And I am forever grateful to people I know and people I will never see again for that.

Thing is, you must be raised some way. You must have some bias, some understanding of social (or ethnic) boundaries. You have to develop a way of understanding the world. And I guess all I'm trying to say is that I'm glad that my experience—my tribe—was Christianity.

And that's all I'm gonna say about that.
Posted by Ryan Lee Sharp at 4:20 PM 7 comments: 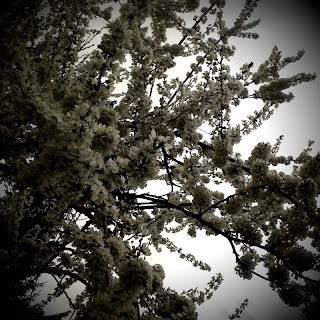 Last year, our plum tree put out but 3-4 inedible pieces of fruit. I'm sure part of it was bad pruning and years of neglect. But part of it might have had to do with poor fruit set last Spring since the wind killed most of the blossoms as soon as they opened.

Fingers crossed for this year's harvest.

Posted by Ryan Lee Sharp at 9:19 AM No comments: 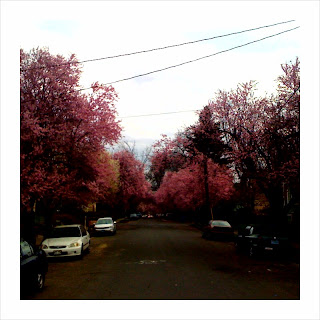 She came early this year, the cherry blossoms telling us of what's on the horizon.
Posted by Ryan Lee Sharp at 9:13 AM 1 comment:

One of My Favorite Smells 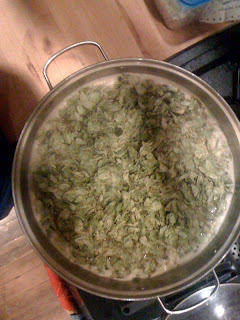