Wow. I am about 70% of the way through Pathways to Bliss and I have just loved it all so far. But the library tells me it's due today and I cannot renew, so I'm going to jot down some quotes I really dug.

He uses Freud and Jung quite a bit in exploring Western understandings of id, ego, superego, social pressuring, shadow, etc.

He points at our shadow—our deep suppressed subconscience —as something we must all come to terms with at some point. All that we have desired (id) and been told that we cannot have (superego) needs to be recognized and dealt with, he suggests. There is great potential lurking in those dark depths.

It is, of course, a scary thing to consider...because who knows what the collateral damage could be. 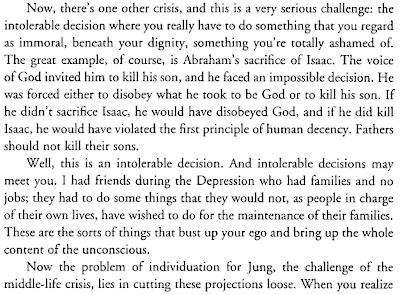 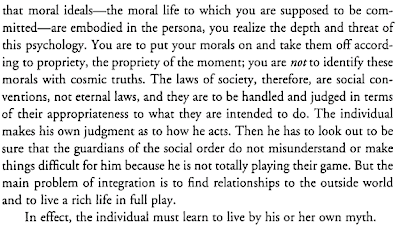 It's been so great to have Dan and Bethany living in our basement apartment for the last year or so. But it's soon time for them to venture back to the lovely little town named for Saint Francis. Dan's going to be pursuing a Doctorate in Nursing and they'll both be finding better jobs (fingers crossed).

It's a great little spot. Sunny for a basement. Nice size. Open floor plan. Full kitchen and laundry area. And it's in the hippest part of SE Portland!

If you are interested (or know someone who might be), please email me. Thanks. I can't find any pics, but I could shoot some and email them out if someone would like to see the place.
Posted by Ryan Lee Sharp at 3:48 PM No comments: 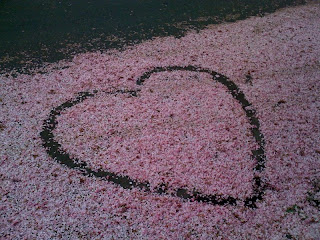 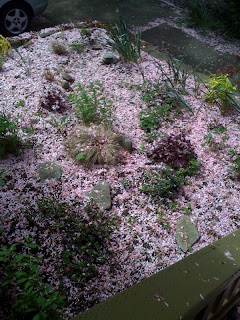 The cherry tree has given up most of it's petals. Beautiful, this
fleeting thing called "bloom".
Posted by Ryan Lee Sharp at 12:29 PM No comments:

"I and the Father are One" So grateful to my cousin Nathan, who recommended that I pick up a book by Joseph Campbell. I looked at my library for Myths to Live By, but couldn't find it. I settled, instead, on Pathways to Bliss. The title barely gets at the book's content.

Anyway, I'm loving this book. I'm always into books about human development and the evolution of social (and religious) constructs. I have been on a path of discovering the myths I have bought and sold and lived by. And this book has been very helpful.

I'll probably get around to posting some quotes later, but I just read this section and had to share it...

"In [Christianity], we do not emphasize the inner experience of identity with the divine. Rather, we emphasize the means of achieving a relationship to the divine. Ours are religions of relationship: A relates to X. Of course, in the Orient, A equals X and doesn't equal it, both at the same time. Relationship and identity are two different formulae."

And this put into words some thoughts I have been having, namely: Perhaps Jesus isn't someone to emulate in a sort of moral, political, literal way, but rather a model of what a true human could be. And perhaps we aren't to live a second-hand life, lent to us by a Jewish Rabbi 2000 years ago. Perhaps we are to find our own experience, as he did.

He was killed for blasphemy, for suggesting identity with the Ultimate as opposed to merely relationship with It. This is such a significant difference, one I continue to try to get at here on this blog. What we need is in here...not out there.

Anyway, if you want some great reading, check out one of Campbell's books.