Probably the two most spiritually influential books for me over the last few years have been Ken Wilbur's A THEORY OF EVERYTHING and Edwin Friedman's A FAILURE OF NERVE. These books have given words to feelings I have had. They also took me further than I could go on my own.

These books are quite different, but they have a common thread: They both base their hypotheses on evolutionary theories. Their assumption is that creation is going SOMEWHERE. Wilbur uses spiral dynamics as well as his 4-quadrant approach to get this across. Friedman uses evidence from how our survival instincts have caused us to bond together (or remain separate and distinct) only when it is useful on an evolutionary level.

At Brittian's suggestion (and by the persuasion of Krista Tippet's SPEAKING OF FAITH podcast), I am reading Eckhart Tolle's A NEW EARTH. I am really only into the first chapter, but I already vibe with a good deal of his assumptions about how the world works and where we find ourselves. 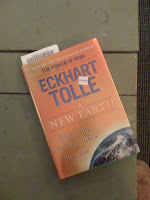 His theory is also based on the idea that humanity is at a crucial moment of evolution. And it is, again for me, very compelling. He primarily seems to be pointing toward a more inner type of evolution (inner in both a personal and communal sense...the two "interior quadrants" Wilbur would say). Perhaps he'll broaden this to a larger internal-external, 4-quadrant approach by the end of the book, we'll see.

Brittian and I had a short conversation via text yesterday about this idea of "Evolve or Die!" which is a sort of slogan that you tend to hear in some of the more progressive/liberal/environmentalist circles. Tolle points to the idea that (as many evolutionary theorists would agree with) we came from the water. At some point along the way, some creature climbed out of the water...and slowly, over the course of a good deal of time, land-based animals began to appear. But the fact that Brittian brought up is that we still have fish and reptiles (that never became birds) and other "lower species" as I've heard them called.

And I wonder what this means regarding the greater global consciousness. Must we all evolve? Wilbur offers a comforting (for me) way to look at this...through spiral dynamics...which while moving on a sort of linear path, it doesn't assume hierarchy, but rather a holarchy. But what would it mean if most of the leading edge of "progression" in this world was to happen in the West? Brittian and I both had a sort of visceral response in opposition to that idea...for why would WE be the ones? We, the people of violence, massacre, atom bombs, etc?

Truly a good many of us have felt a good deal of guilt about our place as privileged, white, American, European, whatever equals powerful people. We have been ashamed, questioned our assumptions about identity, reframed historic figures to speak out against us (as some sort of penance), and generally felt lower than humble.

But then I thought of Mandela's oft-quoted comment, "Our greatest fear is not that we are inadequate, but that we are powerful beyond measure." And I think that we are afraid that WE REALLY ARE THE ONES. It seems arrogant, ridiculous, and downright awful. After all, hasn't this mentality been the thing that has fueled the likes of Manifest Destiny?

But perhaps we (certainly me) have thrown the baby out with the bathwater a few too many times. And this is where Friedman was helpful for me. Getting over our desire to do everything "right" and instead aiming for the good...for a fucking decision at all! I mean, how many of us are stuck, wondering, weighing the options, waiting for some ridiculous notion of external confirmation (how many times have I groaned while hearing, "I'm waiting for God to show me what to do."). Bogus! We have failed to listen to our own selves, to believe in ourselves.

"Your playing small does not serve the world," says Mandela. And perhaps he's right.

What do we do with that? I'm gonna read on with Tolle and see what he has to say.
Posted by Ryan Lee Sharp at 8:49 AM 6 comments:

Here are some photos Holly and Bethany took along the way...I'll post them every once in a while.

We'll start with cleaning and crush. We rented a big ole crusher-destemmer from the local brew shop to help us process the 1/2 ton of grapes we got. The machine takes the stems out and lightly crushes the grapes. In ancient times (and still today in some circles), people actually do stomp these with their feet. We were happy to let technology work for us. :)

I brewed up my FreshHop Pale Ale for the occasion. We all drank our share that evening, finishing off about 4 of the 5 gallons in that keg. Mmm.

I think it'd be worth it to click on the images to get them bigger! 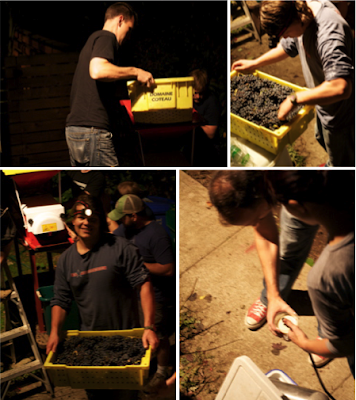 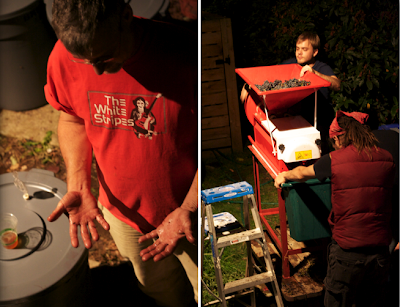 Posted by Ryan Lee Sharp at 9:15 AM No comments: 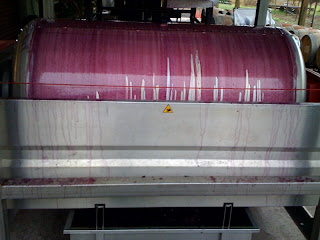 Sent from the future.

To reach me in the present, call me at 503.662.2120 or email me at ryanleesharp@gmail.com
or visit me online at http://www.SharpSeven.com. 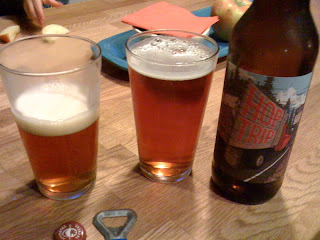 I must say that I was so disappointed this year for Sept to roll
around and for Zupan's/Meyer not to carry this fine beverage. What
gives?!?

After some searching, I found some at the Meyer in Hollywood. Thank G
as my sis says.

HopTrip is a real treat. And it's only available for about 1-2 months
each fall. Made from wet hops (or fresh, undried hops), it is the
smoothest Pale Ale you've had. This is the beer I modeled my last
batch after.

So happy it's here. And happy to be drinking it this evening.

Posted by Ryan Lee Sharp at 6:16 PM No comments: 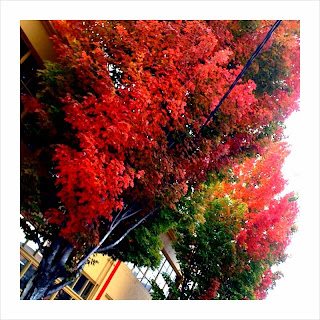 My favorite time of year.
Posted by Ryan Lee Sharp at 4:41 PM No comments: 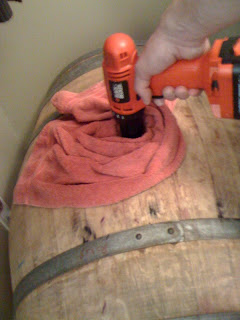 The wine is in the barrel, so today is the day to innoculate te wine
with Malo Lactic Bacteria. This is also called secondary fermentation.
In contrast to primary, where yeasts convert sugars to co2 and
alcohol, secondary is the act of converting malic acid (think apple
tartness) to lactic acid. This makes for a smoother feeling and
tasting wine.

In addition to getting secondary going, today we start stirring the
lees (the sediment at the bottom of the barrel...mainly spent yeasts).
For this we have a plastic/steel stirrer that we attach to a low-speed
power drill.

We will keep the temp around 70' and hope to see bubbles soon! 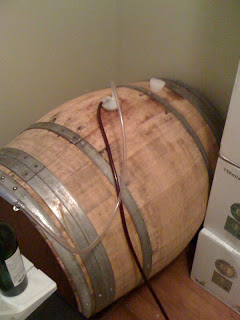 Yes, yes, it is a little sooner than we had anticipated, but we
thought it best to transfer earlier.

The barrel smells sweet and the time is right. Here goes...

Posted by Ryan Lee Sharp at 9:12 PM No comments: 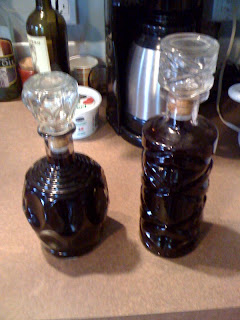 Well, we pressed this morning. Pics to come. Got about 73 gallons or
so. We will lose as much as 10 gallons along the way due to racking
and evaporation. And then we will also end up with 3 gallons of Petit
Sirah.

What a fun, wet day. And here are our spoils to enjoy right now. An
extra few liters. Yum. 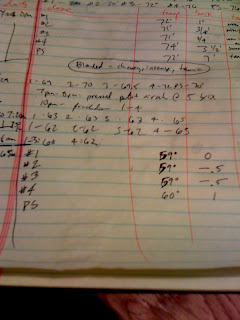 Brix count is below zero. It is a good time to press. Tomorrow AM.
Posted by Ryan Lee Sharp at 6:59 PM No comments:


Consider getting someone some music from The Cobalt Season through our website. And celebrate fall!