Jamie Moffett just sent me this pic from the JFP tour. It's a teaser of what's to come. Holly and I are helping design a quarterly publication called CONSPIRE! Plotting Goodness. 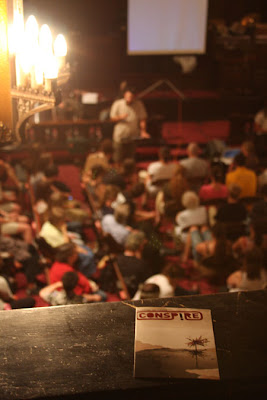 Today, we take off and head up to Portland for some relief from the heat, and to see what might be in the future for our family. Your thoughts and prayers along the way would be appreciated. As well as Portland connections.

Today, we'll try to make it up to Medford. Tomorrow, before heading on up to Portland, I'm hoping we can stop in to their up-and-coming "Oregon Napa Valley" which makes some fine wines from warm weather (as opposed to the Willamette Valley which produces many cool weather wines). 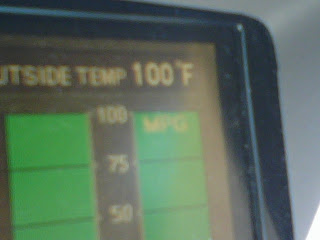 If you didn't get enough of me and The Cobalt Season via the Emergent Village Podcast or the Nick & Josh Podcast, then perhaps try on the SimpleMuzic Podcast. Russel and I sat down in his apartment a few weeks back and talked about the music-making process, searching for something "better" and stuff of that nature. Enjoy.
Posted by Ryan Lee Sharp at 12:52 PM No comments:

Thanks to my brother-in-law (who refuses to blog) for this link.

The idea is that there is a genetically-mutated bacteria that can convert waste materials like wood chips or particular grasses into crude oil. Oh, and the crude produces a petroleum that is carbon-negative. Weird. Cool?

Of course this is no "big answer," but it is perhaps a step in a better direction than fossil fuel or food-fuel. Check out the article.
Posted by Ryan Lee Sharp at 7:33 AM 1 comment:

Thanks to Ryan for tipping me off to this movie. Just having finished my Introduction to Winemaking course, I'm stoked to see this in the theatres.

An interview with yours truly was just posted over at the Nick and Josh Podcast website. Check it. Or if that link doesn't work, check this out.
Posted by Ryan Lee Sharp at 5:17 PM No comments: 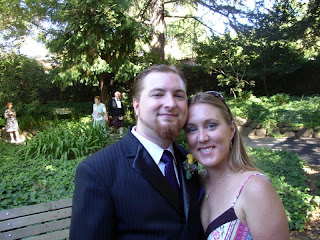 Jared and Lacy are getting hitched today.

Wow, it seems like just a short time ago that these cats weren't even engaged! And here we are today, all going to a big wedding at the Great American Music Hall. I hope I'm funny, but not too funny.

Congrats to the two of you.
Posted by Ryan Lee Sharp at 6:35 AM 1 comment:

Ebb and Flow, High and Low

Yip, that is life.
Posted by Ryan Lee Sharp at 9:43 PM No comments:

On the near eve of Jared and Lacy's wedding, we celebrate by (re) releasing Fragile Iconoclast as digital download. We really wanted to push the CD/DVD combo because we feel like it helps to really tell the story of this new album, but I understand that many of you (like me) are completely used to digital purchases.

So, if you've been waiting for a digital download before you were going to buy the album, now you can make that big purchase. Just go here. Enjoy.
Posted by Ryan Lee Sharp at 8:25 AM 2 comments:

Who are you to me? 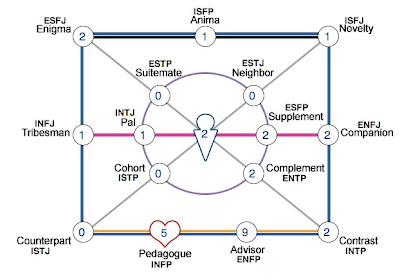 Do the test for yourself here.
Posted by Ryan Lee Sharp at 5:21 PM 17 comments:

1 Our government would allow foreign aid agencies to get involved in the relief works, as people desperately need the help from experts from outside.

2 Local aid workers and volunteers were exhausted and fatigued. As this is a long-term process, please pray that they will be fit, both physically and mentally, to resume their tasks, with perseverance and firm determination.

3 The refugees were empty-handed when they were forced to leave the camps. Please pray that God will protect their paths, lead them to do the task that is suitable for them, and provide them the strength to continue their lives.
Posted by Ryan Lee Sharp at 7:04 AM No comments:

Brilliant Mark.
Posted by Ryan Lee Sharp at 10:37 AM No comments:

The Cobalt Season (sans Jared) will be performing short sets at The Church Basement Roadshow and at Jesus for President here in the next couple months. Come on out, yo.

Get the word out, yo!

Posted by Ryan Lee Sharp at 9:05 AM No comments:

The Baby and The Bathwater

When I officially began my deconstruction process many years back, I remember folks telling me not to throw the baby out with the bathwater. It pissed me off back then. It wreaked of safety and precision. I assumed that if Jesus of Nazareth called us to radically rethink everything, that there would be some collateral damage. In fact, I welcomed it.

I have felt a good deal of that collateral damage, seen it inflicted on others, and have generally come to appreciate (but not suggest) the idea of not throwing out the baby with the bathwater.

I still feel that people with a conviction/dream should try to live into it. Try it out. Push into it. You'll probably find that it's not all that you thought it would be, but you'll learn something from it and why waste away never trying truth on?

But I must say that I did throw out several babies while trying to drain the tub. And while I can defend myself and say it was all in the name of getting at that unattainable Truth, I still owe several folks many apologies. My bad.

It seems that there's a great many of us who are in some state of deconstruction, trying to figure out what to keep, what to reinvent, what to leave behind all together, what to caution others against, what to encourage others toward.

And we're ready to throw off the chains in the name of revolution...but sometimes we find ourselves in liminal spaces where rules haven't been set...we're groping...trying to do the best we can to improvise. And perhaps this is where community comes in. Other people (whether local or far-away or from ages past) can help us along the way.

But I'm not here to preach about community. I'm here to suggest that it's okay for us to grieve at the lack of certainty that so many of us live with these days. Damn, those Egyptian days of certainty feel far away and strangely, romantically comforting...calling me back there.

But I won't go. I'm try my luck in the dark a little while longer before I go back.
Posted by Ryan Lee Sharp at 9:00 AM 2 comments:

We finally got moved our of our home in San Francisco. It was a wild ride...a few days long, the last one spent cleaning on hands and knees. But with 4 of us, it made the process seem quick and social.

Craig and Lora have kindly offered their place for us to crash for a bit. Originally, we had considered a longer stay in the Bay area, but the more we thought about (and still think about it), we'll probably try to move to Portland sooner than later.

First step, we are subletting a house in the Sunnyside district (where we want to live) for the last week of June and first week of July. That should be great...best time of year up there and it'll give us a chance to really see if that's the neighborhood (and city) that we want to live in.

We'll hope/plan on remaining in Oakland through summer...perhaps even into early fall (so I can make my wine!)...but we'll wait and see.

Welcome back to liminal space.
Posted by Ryan Lee Sharp at 6:47 AM 1 comment: