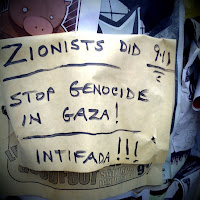 Sinners and saints, priests and kings
Are we just using God for our own gain?
What's in a name?
Open your eyes

A matter of land or a matter of who's simply right? Who knows. Hamas bombing a few; Israeli armies bombing too many to count. Who's less wrong?

I have no wisdom to offer on this topic. But the link between these Israeli Zionists and 9/11 strikes me as very thoughtful on a most subtle level. It's not the same people (in my opinion)...but it's the same mentality. One singular "chosen" people of God (what bullshit) that are trying to create a world to agree/support with that ideology/mentality/group. And what does this mean? Obliterating the Other.

Again, I have no comment on this. Just sadness. And a feeling of anxiety at it's potential complexity. And I'll leave it at that.
Posted by Ryan Lee Sharp at 7:14 PM

Read this recently, liked what it said:
http://www.conversantlife.com/global-concerns/palestine-1300-israel-13