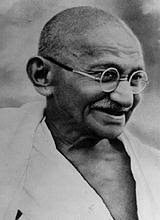 Holly is reading The Life of Mahatma Gandhi, and she read a quote to me that to me seemed profound...

Gandhi's Christian friends taught him the essence of Christianity. They said if he believed in Jesus, he would find redemption. "I do not seek redemption from the consequences of sin," Gandhi replied. "I seek to be redeemed from sin itself." They said that was impossible. Nor could Gandhi understand why, if God had one son, he could not have another. Why could he go to heaven and attain salvation only as a Christian? Did Christianity have a monopoly of heaven? Was God a Christian? Did he have prejudices against non-Christians?

My friend Darin says the story of the Good Samaritan is oft misunderstood. It's as if Jesus was telling what a good Jew would look like in their 1st-century Palestinian context... He perused the area and said that a good Jew might look like that Samaritan over there... And earlier this century, one might have asked what a good Christian looked like, and God would have looked across the earth and said, "The best I could find is Gandhi, a remarkable Hindu."

An interesting man, that Gandhi. I cannot get past him it seems.
Posted by Ryan Lee Sharp at 7:09 PM

Ryan,
I too am reading that book and have found how great he really was. He wasn't just a good Hindu, he was a good man of God. I firmly believe that. Anyway, God Bless man.

Joey Mejia said...
This comment has been removed by a blog administrator.
11:00 AM

Ya that Gandhi . . . he was such a whiz kid. Starved himself for peace. So anybody know how that worked out for him? How about in the afterlife?

I wish more hippies had the smarts of that mastermind.