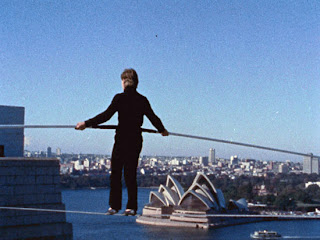 Holly and I downloaded this film a couple nights ago. What a great film. So interesting to get into the mind of someone like this.

If you haven't heard of the film, it's a documentary (with some great archival footage as well as some reenactments) about the legendary wirewalker Philippe Petit. Well, I didn't know of him, but perhaps I'm too young. He was a boy when the twin towers were being built and made it his life's goal to throw up a tightrope between the two towers and walk it.

“Life should be lived on the edge of rebellion,” he says. I love it. He defied all rules. Of course, all I could think through the film was, "Who's bankrolling this joker?" Seriously though. Get a real job, dude. ;)

But what a beautiful life...not for all...but beautiful that he lived this insanity, this magic, this mental illness called imagination.

When he came down from the twin towers, all the American media could ask him was, "Why did you do it?"

"Well that's a completely American question, now isn't it?" He responds. "There is no why. It just had to be done." (I'm using quotes, but paraphrasing, sorry.)
Posted by Ryan Lee Sharp at 9:45 AM

One of the better-produced documentaries I think I've seen, not to mention the incredible story. I'd watch it a second time, and you don't do that with many docs.
Oh, and please don't ";)" again.

Dude, it was an ironic emoticon.

was one of my favorites of the year

watched this a few weeks ago and loved it. i was a bit tired when i viewed it though and would love to see it again so as to catch what i might have missed. the end kind of makes me sad how he is basically estranged from his friends and ex/wife because of running off with that one gal....
great doc though :)