It's been great to be in Spain. While it was just plain lovely to be in Paris with Craig and Lora, it's been sunny and comfy here in Spain.

Paris is full of nice-looking folks dressed in black. Spain exudes color. And I just love that contrast. I now remember why we vowed to come back to Spain after our last trip here.

Let's see...what have we been up to since we got in Saturday night. Well, the trip to get here was crazy...

Woke up at 4.30am
Boarded the METRO with Craig and Lora at 5.15am
Transfered to the RER with Craig at 5.30am
Detrained and checked into our flight at 6.30am
Raced around to find food and bevarage around 7am
Flew out of Paris around 7.30am
Landed in Madrid at 9.15am
Took a cab from the airport to the Atocha train station and arrived by 10am
Second breakfast at 10.30am
Validated our Spanish rail passes and drank a gallon of water around 11.30am
Boarded our highspeed (330km) train at 12.30pm
Pax went down for his nap around 1pm...slept until about 2.30pm...we just enjoyed the downtime
Arrived at 3.30pm into Málaga train station
Mom and Ned picked us up and we got lost and then made it to the Marbella Marriot around 5pm

Whew. That was a long day.

Other stuff we've done has included driving to the hilltown of Ronda, the beach (a few hundred feet from our room), the sauna/steam room, tapas, ice cream, café, and driving around southern Spain all day yesterday.

We left yesterday morning around 6.30am to drive to Tarifa where we'd pick up the ferry to Morocco, but the winds were too crazy to allow passage, so they canceled all the ferries for the day (and today as well). So, we grabbed breakfast and then kept driving up to Vejer, Cádiz, Medina Sidonia, Los Barrios, Algeciras, and a few other places. Many pueblos blancos, mostly mediocre food, and a crap load of wind.

All in all, amazing. The sights were beautiful. Turquoise waters, 8th Century BC Phoenician ruins, Roman temples/cathedrals, Moorish domes, roads and more roads.

I bet that all in all, we drove for 5 hours yesterday. The countryside was beautiful. 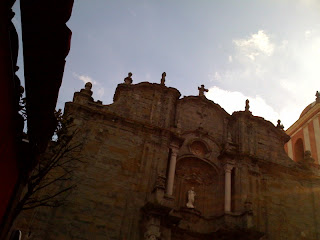