A Proper Evening in Paris

We've been here for well over a week now. It's been a great time. Fun to reconnect with Craig and Lora, see some folks we knew from a distance, and generally have a good time in Paris.

Traveling is something that has defined our life together, Holly's and mine. It's a very different thing to travel with a toddler. You just don't do certain things anymore. It's a bad cost-benefit ratio. And you find new things to enjoy.

But Lora offered us a night out, so we thought we'd do what adults do and frolic about in gay Par-ee.

I found a place in Montmartre, but it was closed on Wednesdays, so I found another spot called Les Elysées near the Arc de Triumphe, so we made a reservation, boarded the METRO and arrived just a few minutes late.

The entire dining room was empty, and they said our reservation name like they had really been expecting us. Weird. The whole hour plus that we were there, we were the only people in the room. What gives? It seated probably 50 people and had only positive ratings online. "Renovation," they told us. Anyway, just weird.

Holly got the Sole and I opted for an plate based on the wine I chose. I have been trying to try wines from anywhere in southern France...Cote du Rhone, Languedoc, Provence. I got a Vin de Pays from Languedoc that I'd guess was Cab based, and was really yummy.

The suggested plate with the wine: Roasted Boar with Forgotten Vegetables. See below. 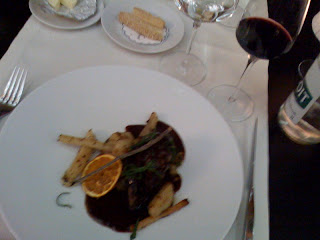 Forgotten Vegetables? Not sure what those were that I ate...perhaps root veggies. The boar was unlike anything I'd ever eaten before. I have had pork (of course), but this was not like pork. Also, the waiter suggested it be cooked medium. "For Pork?!?" I thought. But I took his suggestion.

All in all, it was fine, not terribly gamey, but ridiculously difficult to cut. No kidding: Like a friggin leather shoe. Wow. I had to floss when I got home. It also made me think about how at one point human's wisdom teeth were very helpful in the wild.

Anyway, finished dinner and walked the Champs de Elysées and found a movie theatre and hopped in for Benjamin Button, a movie I had wanted to see for some time. Holly went with me on it. Wow. 3+ hours of a not-so-realized Forrest Gump-Simon Birch hybrid. I enjoyed parts, but it certainly dragged on (as Michael suggested it would) and didn't really deliver...too close to reality to be a myth...to mythical to be considered real. It didn't really hit, you know? C'est la vie....which apparently the French don't say. They just shrug.

Anyway, we are here for 1 more day, then we hop on the Metro, RER, and then an airplane to Madrid, followed by a high-speed train to Málaga, where my family will pick us up and drive us to Marbella. Oh, that's all on Saturday. And it starts before the kiddo normally wakes up. Geez.

Anyway, just checking in.
Posted by Ryan Lee Sharp at 8:50 AM