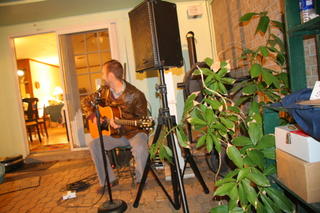 Last night (Tuesday) Holly and I drove from western Houston east to Baytown, past refinaries galore. Strange that for having so much crude and refined oil in that area the gas prices are still $.20 above the national average. Hmm.

Well, Holly and I arrived safe and sound (after several twists and turns) to Randy and Nelda's house in Baytown. Randy and Nelda head this sort of eccumenical community of post-highschool adults. I say, "head," but really I should say that they love and nurture this community. I have to say that what I experienced in this group is unlike many other places I have been. I guess that what I mean is that at the core of this group was nothing but love.

These guys model the notion of responding to God (as opposed to the notion of making a God-thing happen). Randy said himself that he had no artistic sensibilities, but loved being around artists and so has surrounded himself with young artists that he can encourage and nurture... to develop in them what was already going on. So you have college students studying film, theatre, or even dropping out to do music, and other sorts of inspiring things. It seems that several people have been set free to do what they were made to do, not what the machine wants them to do.

The group had me in for a living room show. We set up out back in the backyard (where it got fairly chilly if you can imagine). Travers did several songs. Good stuff. Kind of John Mayer meets Jason Mraz.

Then I got up and did about 10 songs (including 2 new ones). Set up the songs, told the stories, laughed with people who, by the end of the night, were friends. Holly sang 2 songs with me. That was fun for both of us methinks.

Wow. What a spectacular evening. These guys might just be on to something.
Posted by Ryan Lee Sharp at 7:50 AM