Luke and a Big Rig 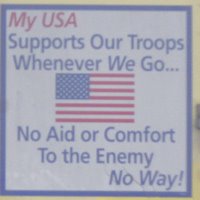 I was reading the following selection of Jesus' words yesterday as we drove by a truck with that sticker on it's rear.

You're blessed when you've lost it all. God's kingdom is there for the finding. You're blessed when you're ravenously hungry. Then you're ready for the Messianic meal. You're blessed when the tears flow freely. Joy comes with the morning. Count yourself blessed every time someone cuts you down or throws you out, every time someone smears or blackens your name to discredit me. What it means is that the truth is too close for comfort and that that person is uncomfortable. You can be glad when that happens–skip like a lamb, if you like!–for even though they don't like it, I do...and all heaven applauds. And know that you are in good company; my preachers and witnesses have always been treated like this. But it's trouble ahead if you think you have it made. What you have is all you'll ever get. And it's trouble ahead if you're satisfied with yourself. Your self will not satisfy you for long. And it's trouble ahead if you think life's all fun and games. There's suffering to be met, and you're going to meet it. There's trouble ahead when you live only for the approval of others, saying what flatters them, doing what indulges them. Popularity contests are not truth contests–look how many scoundrel preachers were approved by your ancestors! Your task is to be true, not popular. To you who are ready for the truth, I say this: Love your enemies. Let them bring out the best in you, not the worst. When someone gives you a hard time, respond with the energies of prayer for that person. If someone slaps you in the face, stand there and take it. If someone grabs your shirt, giftwrap your best coat and make a present of it. If someone takes unfair advantage of you, use the occasion to practice the servant life. No more tit-for-tat stuff. Live generously. Here is a simple rule of thumb for behavior: Ask yourself what you want people to do for you; then grab the initiative and do it for them! If you only love the lovable, do you expect a pat on the back? Run-of-the-mill sinners do that. If you only help those who help you, do you expect a medal? Garden-variety sinners do that. If you only give for what you hope to get out of it, do you think that's charity? The stingiest of pawnbrokers does that. I tell you, love your enemies. Help and give without expecting a return. You'll never–I promise–regret it. Live out this God-created identity the way our Father lives toward us, generously and graciously, even when we're at our worst. Our Father is kind; you be kind.
Posted by Ryan Lee Sharp at 9:37 PM

omg, love the photo in the laundromat with the chinese food! ok, and why does my photo pop up every time i leave a comment?

Man, i saw the same sign on the back of a big-rig about a year ago. Blah.

You know, it's sad that those who don't learn their history the first time are doomed to repeat it.

While Christ said to love others and turn the other cheek when you were hurt, he also stormed into the temple and ran out the money changers. Christ didn't stand for evil in his world; neither are we to stand by as pacifists and watch while evil takes hold in the world we live in.

God gave you and I discernment for a reason -- to judge right and wrong and good and evil. That doesn't mean we're bullies or the world's police, but it does mean we fight against the evil in the world.

Your position is the same as France's during the first and second World Wars. We had to bail them out after Hitler took over their land. Would you rather wait patiently and peacefully by for evil to hit you in your home before you agree to do something about it? Look at France now with the riots; they're in the same position all over again. Except this time, Germany isn't the enemy. Live and let live, don't bother anybody, don't judge anything, and this is what happens.

I have very little tolerance for anyone saying/agreeing that they do not stand with our military, regardless of their political persuasion. These are our countrymen, in harm's way, to protect your freedom to complain about them.

We are one of the few countries in the world that treats "the enemy" with some semblance of respect. We follow the Geneva Convention, even though the terrorists of Iraq and Afghanistan (and other terrorist states) don't. And, I for one, am getting really tired of the "aid and comfort" we do show them, as it ends up risking our men and women's lives. Ask any one of the terrorists if they'd treat us with as much respect. No, they cut off the heads of our citizens after kidnapping them.