I wrote this song just after hearing about this news story. I guess some of my details are/were off, but the point stands: One person's decision caused these people's death.

It struck an interesting chord in me because in light of the US occupation in Iraq. One man's decision resulting in so much death.

Some say pride is the biggest sin. I think that stickin' to your guns when you're dead wrong might just be pride. You do the math...

im so tired of hearin the same old story
to grim to bleak to have to look towards that one day in glory
when one mans plan seem to force some to head over... before their time
but he ran away, run away, don't think he'll mind

ill tell ya about this young man who thought it was over
still that gas-guzzlin suv just couldnt crossover
damned boy walked though, kept to that high ground
them people had no choice, inside those train cars they drowned

but i'll tell ya somethin'
more than i want to know, i want to feel
that somehow... its gonna be alright

GET THE ALBUM or better yet, come see us play... 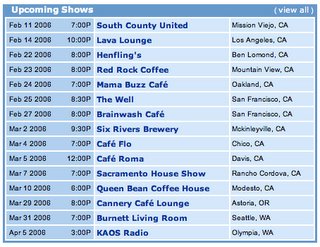