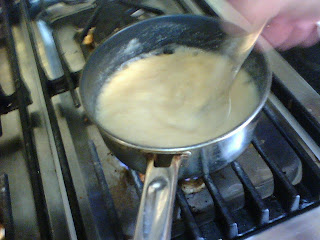 There's alot that has happened personally as of late that I have not shared on this blog. There are several reasons for that, I'm sure. But as I was making Malt-o-Meal this morning (which Holly tells me is just chemicals playing at being malted grains), I remembered my Grandma Roy who passed away a few weeks back.

She got sick from the flu and then took a fall, which caused some bleeding in the brain. For several reasons (known and unknown) she passed away a few weeks later.

Strange thing...wondering how you should feel about a person's death, nay, a family member's death. I never cried. And I don't know if that means I'm calloused or if it's hard to contrive emotions when I won't actually feel the impact until next Christmas comes around and she's not there.

I hope this doesn't sound cold; it's just real. The day after my Grandma Roy died, my father called me to tell me that his mom was being recommended for hospice. Wow. When it rains, it pours, I guess.

When you do this, do it in memory of me.

Grandma, I eat this bowl of Malt-o-Meal in memory of you...all those summers you would take us for a week down to San Antonio, make us banana milkshakes and Malt-o-Meal, take us to the pool. You are loved and missed.

Thanks for being such a good grandma to my friend.